Few counties in England can offer such a variety of landscape and history as can be found in County Durham. As a tourist destination, you will be surprised at just how much there is to discover within its borders; it is the heart of the North East region with its distinctive identity.

Undisputedly, Durham city acts as the county town and, with its World Heritage designation, draws visitors from around the world.

Set firmly on its crowning peninsular, stand the great towers of Durham Cathedral (1093-1133), housing the final resting place of St. Cuthbert and the Venerable Bede; its Romanesque architecture enshrines centuries of devotion and drama. Much of that drama was orchestrated from its sister building standing across Palace Green and high above the River Wear – Durham Castle former home of the Prince Bishops of Durham and now home of students of Durham University.

Here is a town with ancient streets, medieval bridges and pleasant riverside walks that will delight the senses and instil a sense of place that is like no other. 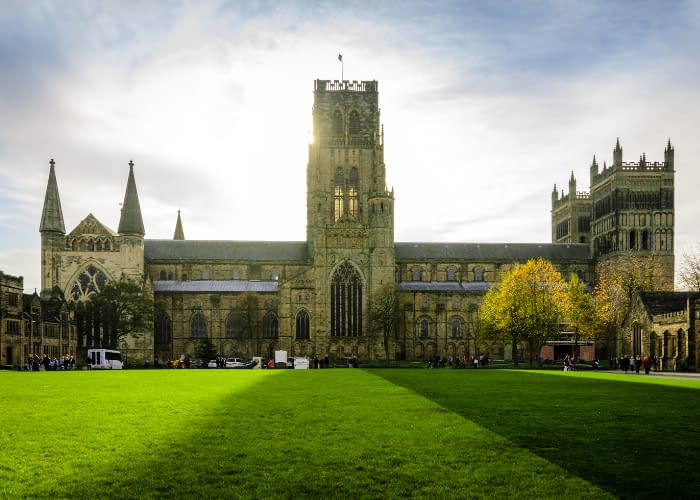 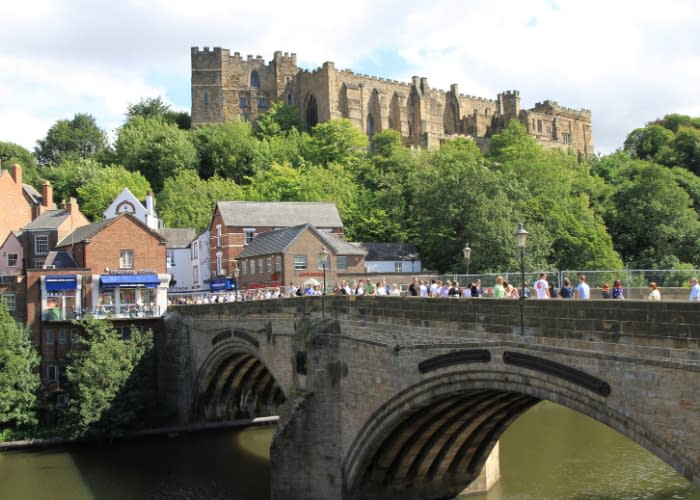 But County Durham can boast town, country and sea shore.

The Durham Heritage Coast comprises areas of Magnesium Limestone grassland, cliffs and denes which can be accessed by the Durham Coastal Footpath. The geology supports rare plants and wildlife as well as fine coastal landscape. 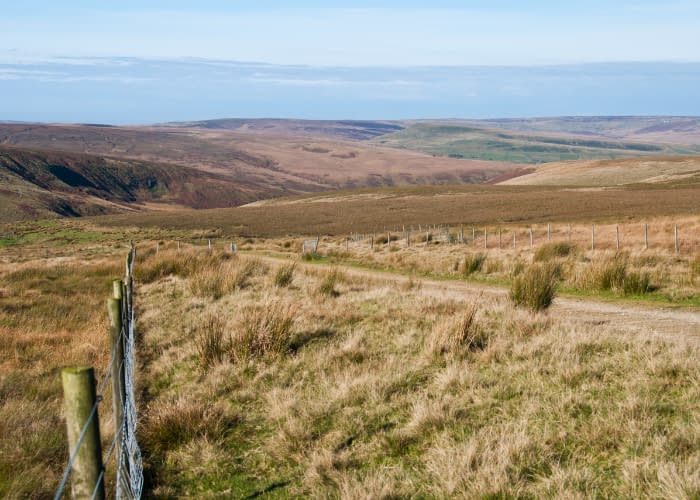 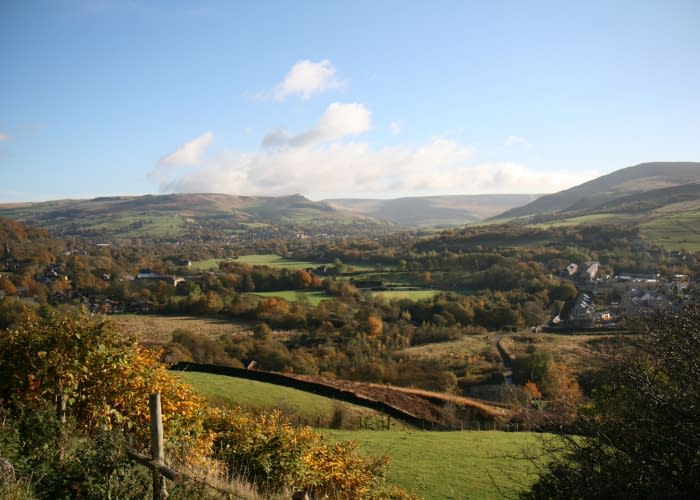 By contrast, the high Pennine moorland in the west side of the County offers the visitor a remarkable experience of scenic grandeur. Delightful river valleys penetrate into the rugged North Pennines: these are the Dales of Weardale, Teesdale and the Derwent Valley.

A great deal of this landscape is part of England’s second largest Area of Outstanding Natural Beauty (AONB), and boasts the first area of Britain to have been given European Geopark, and Global Geopark designation. Its wild, romantic landscape is home to some of the rarest breeds of birds such as the Red Grouse and Black Grouse; and to some of the rarest species of plant life such as Teesdale Violet and Blue Gentian. The hay meadows that adorn these river valleys at lower level attract Linnets and Lapwings as a favoured feeding ground. In these parts can be heard the haunting cry of the Oystercatcher and the Curlew.

Its remarkable geological heritage can be glimpsed in secluded settlements such as Middleton-in-Teesdale, Stanhope in Weardale; and in the Derwent Valley at places like Shotley Bridge with its intriguing story of German Sword makers – foreshadowing the unique Industrial Heritage that helped shape the modern world.

The River Tees tumbles over the rock strata at Low Force and crashes some 70 feet over High Force before it flows on towards the dignified and attractive township of Barnard Castle.

Weardale was part of the Prince Bishops’ hunting grounds whose border was reflected in the village names Eastgate and Westgate.

All three Dales shared in the extraction of galena for Lead production until the Nineteenth century: traces of this lucrative industry of yesteryear can be traced by the discerning eye not only in the landscape but also in the dramatic North of England Lead Mining Museum at Killhope which offers the visitor the opportunity to experience the life and times of the lead miner; and even the option to explore the workings above and below ground. 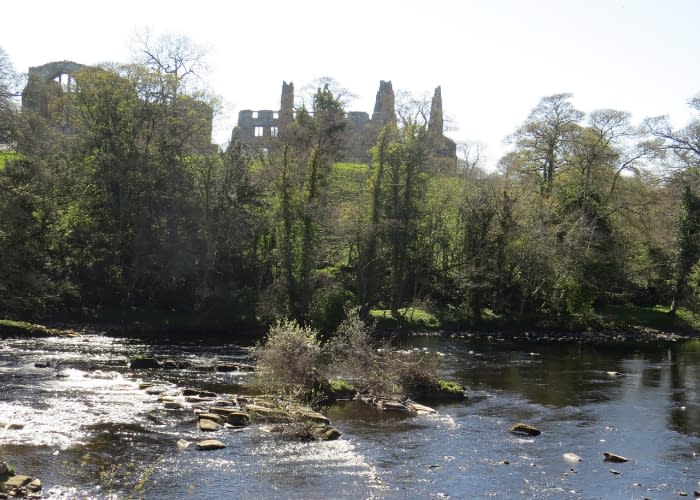 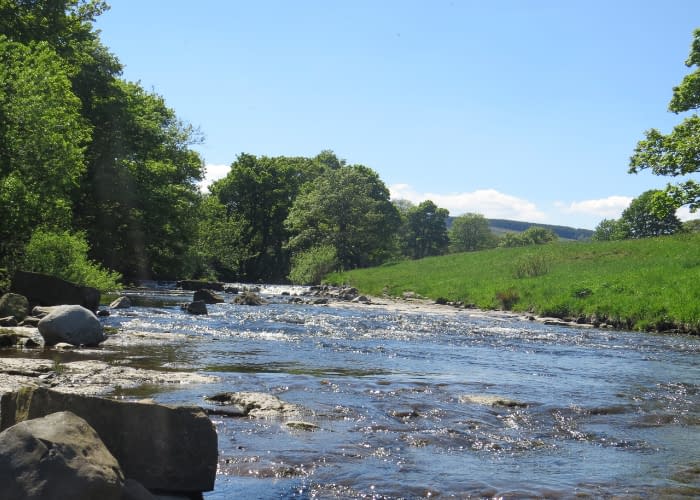 County Durham is a veritable treasure house of history. Its importance as a Norman defensive stronghold focussed in Durham Castle is supported by other mighty edifices such as Bowes Castle with its twelve-century stone keep; Raby Castle and Gardens – an impressive Medieval stronghold built by the Nevills and the scene of the plot to hatch the Great Uprising of the North in 1569; and Barnard Castle (where a critical episode in the drama was enacted), and which commands an impress view over the Tees and the former border of the County Bridge.

And here can be found the astonishing Bowes Museum built by John Bowes and his French wife Josephine as a French style château and set in 23 acres of Parkland. It was opened in 1892 and exhibits a fine collection of European art, textiles, ceramics and furniture and ironically is a legacy to the Bowes family Coal interests which helped pay for this imposing building.

Not far away are the picturesque ruins of Egglestone Abbey, one of the impressive remains of Medieval Churches in the County, such as Escomb which is a restored seventh century Saxon Church fashioned from the stones of nearby Binchester Roman Fort.

In Weardale, the High House Chapel and Museum provide a testimony to the visitations of John Wesley to the Methodist communities that sprang up in the Durham dales in the eighteenth century.

Bishop Auckland is the centre of the exciting development known as the Auckland Project which comprises several locations in the proximity of the town’s Market Place. Auckland Palace was the former country residence of the Bishops of Durham and displays a restoration of the State rooms and the Bishop’s private apartments in the Georgian Gothic splendour fashioned by the celebrated architect James Wyatt.

Within these walls were discussed the affairs of state that were the prerogative of the Bishops ruling the historic boundaries of County Durham, and beyond in so far as it affected the defence of the realm in medieval northern England. The Bishops ruled in these parts on behalf of the Crown with their own jurisdiction, the right to licence castles, their own army, and their own mint: this was the Land of the Prince Bishops.

In the 1660’s Bishop Cousins transformed the Medieval Hall into a large, impressive private Chapel – St. Peters. The grounds and Deer Park of Auckland Castle may be viewed from the 15-metre-high tower erected to provide a visual appreciation of the estate; and in due course the development will be further enhanced by the first Faith Museum in England and a Spanish Art Gallery.

This latter exhibition space is inspired by a collection of Francisco de Zurbaran works – Jacob and his twelve sons and first purchased by Bishop Trevor in the eighteenth century, and displayed at Auckland for over two centuries. Another feature of the Auckland Project located in this vicinity is the Mining Art Gallery which will take you into the dark underworld of the County’s industrial legacy through the works of locally celebrated artists. 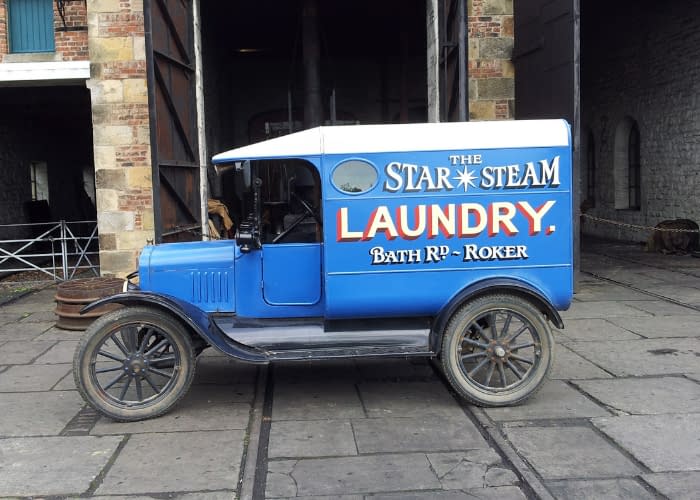 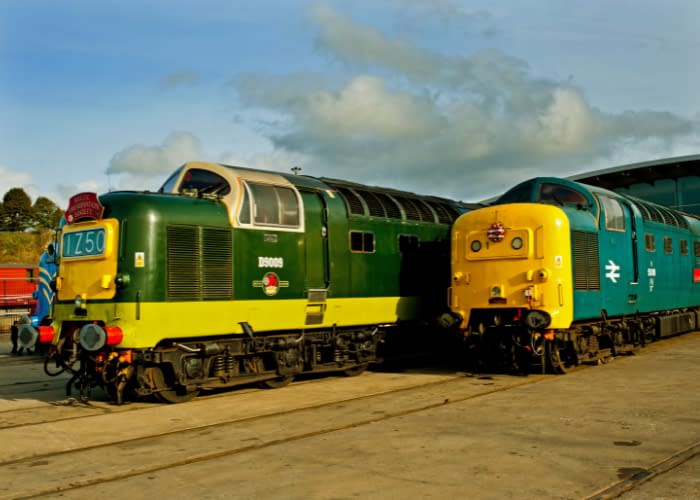 This Industrial Heritage is further recalled by visiting the multi-award-winning Beamish Museum. Here the urban and rural life in the North of England is preserved and recreated by costumed staff, by period transport, by the mining village and its pit and by immersing yourself in the 19th and early 20th centuries; its latest venture is now to recreate the 1950’s.

The NRM Locomotion centre at Shildon exhibits some of the national collection for it was here that the world-famous Stockton and Darlington Railway was to unleash the potential of the railway age.

So much to see in County Durham, so much to do – but to enjoy its full wonder, you will need the expert knowledge and direction of your local Blue Badge Tourist Guide from the North East of England Tourist Guides.